If there’s one thing Cask 88 knows, it’s how to throw a good party with whisky at its core. On Saturday the 14th of August, the beautiful Stables at Errol park

in Perthshire hosted an unforgettable set of festivities. Gathered for the event were the folk who have helped make the whisky industry what it is today – representatives from distilleries, independent bottlers, whisky societies, buyers, sellers, investors – all whisky lovers to a fault. No need to break the ice at an event like this. Mention whisky and the next quarter hour’s conversation is taken care of.

Guests arrived at Errol Park house to canapés and old fashioneds, and a lively ‘getting to know you’ hubbub followed. What initially sounded like the patter of rain and distant thunder turned out to be the set of drum and pipe band Clanadonia, who marched from the house to the stables, with guests following to their rhythm.

Dinner was served in four courses, celebrating Scottish produce of land and water. Wine flowed like water and whisky flowed like wine, and the musical sets of Soul Foundation gave an incredible vibrancy to everything. Outside, braziers burned and flaming batons twirled as the DeLighters performed their fiery show.

It was taken for granted that every guest had worked with whisky long enough that they could not resist a direct challenge to their noses. In an alcove, to the side of the tables and the dancefloor, we had set up the Cask 88 Whisky Casino – two baize tables with a croupier and a set of mysterious bottles each, identities concealed. The skill of the game lay in one’s ability to identify either the region or the age of the whisky sample received in each round of the game; the kind of test that any self respecting whisky fan revels in.

It quickly became a hub of activity, drawing crowds eager to taste excellent whisky and gamble on their ability to identify. Stakes were made, and glasses were moved around the tables – double stakes returned to those whose nose for whisky was strong. Stacks of chips could be traded for prizes kindly donated by Glenfarclas, Whisky Foundation, Jane Davidson, Stewart Christie, Cairn O’Mohr & Angel’s Share – but there were plenty of rewards in simply playing the game itself!

For those whose luck and skill didn’t align, more chips were bought – and at the end of the evening a nice sum had been raised from chip sales to donate

to Children 1st – Scotland’s National Children’s charity. Many thanks to everyone who participated.

These games were a lot of fun, all in all. There may be a few rule tweaks in the future, but next time you attend a Cask 88 event, keep an eye open for a casino corner. Put your nose up against some exquisite mystery drams and see how much you can win.

While we had our captive audience, we took the opportunity to give a physical face the launch of our second online cask auction. Once again, the auction was a wonderful mix of cask types, cask ages and a good variety of Scottish distilleries from all the regions. All the casks came under the theme of ‘fertile heartlands’ where we drew attention to distilleries’ provenance of barley. Though all the actual auction casks were safely hiding in their respective bonded warehouses, we brought in representative casks to decorate the room and give information about the whiskies available.

Some auction highlights include a Bruichladdich which has been maturing for since November 2001 in a rum barrel, a particularly tropical Craigellachie that’s had 7 years in a Bourbon barrel so far, and a pair of Arrans – one peated, one not – neither of which has yet crossed the 3 year line to become whisky. Some rather nice whiskies (and new spirits), all told. The people meandering between our display casks were certainly impressed.

Bidding will remain open until the 10th of October 2019,  and we hope that the success of the first auction is matched, and that these exciting casks of Malt Whisky will find happiness with their new owners. If you’d like to know more, and maybe even place a bid for your very own cask of Single Malt, follow this link.

The evening was a tremendous success, and we’d very much like to thank everyone who attended for making it such a memorable event.

Thank you to Maclean and Bruce for tremendous top-down organisation, A & D Bar Services for feeding us so well, Ali Watt for taking beautiful photos (featured in this article!), Poppy Floral Design for the flowers, everyone who donated prizes to elevate excitement at the casino to a fever, and to Clanadonia, The Soul Foundation and Delighters for magnificent music and entertainment. 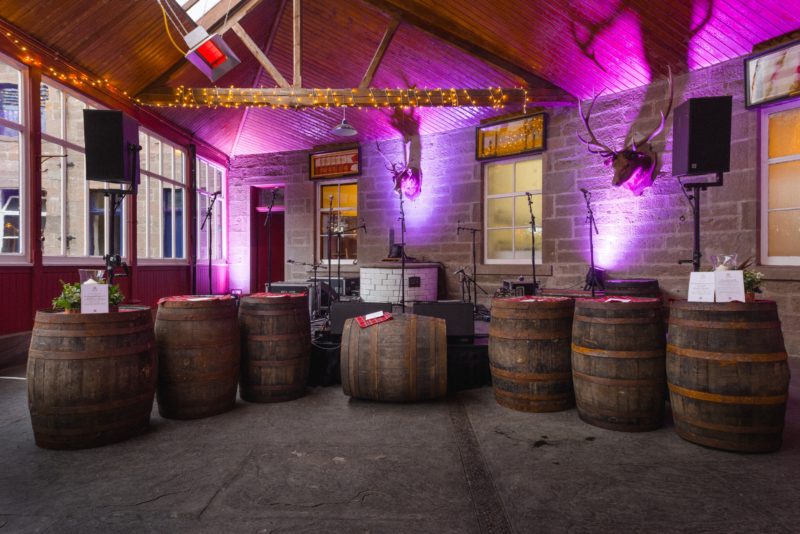