It is a truth universally acknowledged, that a person who finds themself in possession of good whisky, must be in want of advice on how best to drink it. The prevalence of ‘tasting videos’ on the internet proves that we whisky drinkers are continuously enraptured by the different ways people drink whisky. Today, I take a look at how Scots historically have drunk their water of life. A little bit of whisky history for you!

I myself have been inspired by a much less advanced source than a Youtube video; it was, indeed, a book. Yes, we at Cask 88 are very old school and are often inspired by books. I was very thoughtfully gifted a nice 70s copy of Scotch: The Whisky of Scotland in Fact and Story by Sir Robert Bruce Lockhart. Perhaps this book isn’t always to be taken as writ; some of Sir Robert’s suggestions, like his Hot Toddy recipe (which I shall repeat here), probably shouldn’t be taken literally. He himself admits to the book being more of a ‘personal history of Scotch whisky’.

Yet Sir Robert was also a serious force to be reckoned with. He was a British diplomat, journalist, author, secret agent, and footballer with, as he proudly tells us, ‘not a drop of English blood’ in him. As such I have decided to take his studies and statistics on historic Scottish practices as my kind of truth. 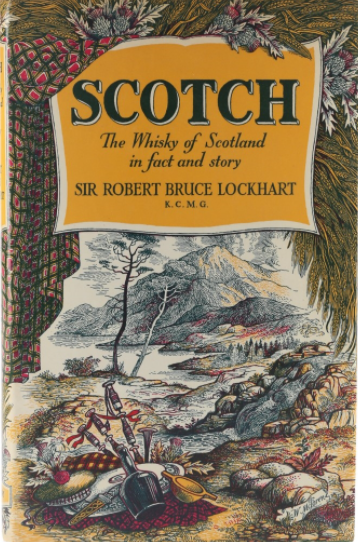 Sir Robert wrote his book in the summer and autumn of 1950, quite a while ago. Yet some topics that he casually remarks upon may be quite striking to the contemporary reader. The first is a very offhand remark about women drinking whisky

The issue of ‘Women in Whisky’ has inspired many the whisky blogger, distillery and even some mainstream media of late. A common experience in my life, mostly when working with newcomers to whisky, was to hear the question ‘which whisky is best suited for my wife/sister/female acquaintance?’ Read, ‘is there any whisky a woman may be able to handle’?

Well, dear reader, something has halted progress on this front because it seems as far back as the 1950s women were gaining a reputation for enjoying a dram. While updating us on how whisky is enjoyed in his time Sir Robert says:

‘Moreover, Scotch whisky, which used to be regarded as a man’s drink, is now becoming increasingly popular among women.’

We lady folk have been drinking spirits since the dawn of time! Women like all different kinds of whisky and many of us are authorities on the subject. For many of us the legacy of women in whisky is very apparent – we don’t really need Sir Robert to back us up on this one – but, by pleasant chance, he has!

The second surprising revelation R. B. Lockhart has for us is on the issue of a Scot’s favourite drink. Although Scotland is world famous for producing whisky, he reports that it wasn’t our favourite drink:

‘During the last score years there have been few changes in the history and habits of whisky drinking. In Scotland itself there has been since 1939 a tendency to drink more gin and beer, solely because the bulk of mature whisky has to go abroad to strengthen our currency and Scottish consumption is therefore limited.’

Some things truly go full circle, don’t they? My weekly visit to my local supermarket and obligatory scan of the alcohol aisle reveals that gin and beer are the preference of Scots in 2021 as well. The Scotch section is around half the size of the Pink Gin section alone while across the aisle you will find a dizzying array of colourful Scottish Craft beers miles long.

It is also true today that most Scotch whisky is sold abroad. Is this the burden we bear for creating such a sought after, delicious and premium product? Perhaps it is our duty to share it with the world. Even if, as a result, there is less for us…

Yet We Have Done Our Part in Drinking Drams

The above isn’t to say that Scottish people don’t drink whisky per se. Sir Robert tells us that in the 19th century, the century during which many Scotch distilleries first started getting their licences, Scots did their fair share of whisky drinking. According to Sir Bob:

So the Scots were doing a lot of the drinking and, he tells us, back then it was mostly whisky. Before you get ideas of too much dark, drunken alcoholism let me tell you that whisky was drunk socially as part of festivities. Lockhart tells us that back then malt whisky ‘was…the only drink at weddings and the final door drink (deoch an dorius) to any parting guest. Even more so was it the drink de rigueur at every funeral of rich and poor alike.’ So whisky was consumed as lovers officiated their union and as communities laid their loved ones to rest. It was consumed by the upper echelons of society as well as the working people of Scotland. The latter perhaps taking advantage of the less official distilleries of rural Scotland. All Scots were united in seeing whisky as a key element of hospitality.

‘A laird would consider it a disgrace if at his mother’s funeral his guests were not carried to their beds; a poor crofter would spend or borrow what he could to send the mourners away fully satisfied.’

I would argue that hospitality is still a key element in the Scottish psyche. We are very much looking forward to the days when we can casually offer a visitor a cup of tea or, better yet, a dram.

Common Different Ways of Drinking It

Now that we have established the ‘who’ (everyone) and ‘when’ (mostly at events) whisky was consumed by historic Scots perhaps we may finally look at the ‘how’. How have Scots historically enjoyed their whisky?

Sir Robert tells us that when Highlanders took for themselves a little whisky, that really they preferred it neat. However the people of the Lowlands and the occasional Highlander may have used whisky as ‘the final glory of a feast’. This is the most dramatic way to talk about pudding I have ever heard. Whenever dinner parties are next allowed I plan on heightening my life by first blowing out the candles after dinner and then announcing to my bewildered guests that soon they will discover ‘the final glory of their feast.’ I expect many to run in fear. Only the brave shall dine on my profiteroles.

When Lockhart talks of ‘the final glory of a feast’ he is actually not, as I have just imagined, talking about pudding per se. Rather he is talking about whisky mixed with sweet things like oats and/or honey to make a most potent and flavoursome final concoction. He gives us a few recipes for a sweet and oaty Athol Brose and the much less viscous Hot Toddy. Here is his recipe for the latter.

‘First, you heat the tumbler with warm water and, when the glass has reached a comfortable temperature, you pour out the water. Then into the glass you put two or three squares of loaf-sugar and add enough boiling water – a wine glass should suffice – to dissolve the sugar. Then add a wine-glass of whisky and stir with a silver spoon; then another wine-glass of boiling water, and finally to crown this liquid edifice top it with another wine-glass of whisky. Stir again and drink the contents with slow and loving care.’

I am not certain what a standard wine glass was in the 1950s but this appears to me to be a particularly large and boozy Hot Toddy – perhaps not advisable. Lockhart’s secret aim of getting the reader drunk is further elucidated by his advice to anyone looking for a cure to the cold to ‘take your toddy to bed, put one bowler hat at the foot, and drink until you see two.’

What Can We Learn From Sir Robert?

Although we may have to take a lot of what Sir Robert Bruce Lockhart writes with a pinch of salt I hope you will agree that he gives a fascinating version of the ‘who’, ‘when’ and ‘how’ Scots have drunk their whisky. Books like this, written on a familiar subject but penned so long ago, are a treasure trove. It is so fascinating to get a different perspective; to see what has changed and what remains the same!