A few of you may know, especially if you have seen Swedish Whisky Girl’s new video, that 23 Castle Street is home to a very peculiar whisky library. A veritable treasure trove to a whisky collector, whisky enthusiast or even a cursory whisky drinker. We have been a little coy and shown you snippets now and then on Youtube and social media but we have yet to bare the truth on any of the individual bottles in that collection.

Except for the ones we made, of course. We tell you about them all the time.

So for this entry into the Cask 88 ledger we will be telling the tales of three pretty rare and old whiskies from the Whisky Library. A look at history and at the future. A passing mention to Ralph Fiennes. A feast for the eyes and soul.

Before we begin it is probably worth mentioning that with everything opening up a bit here in the UK, one may actually be granted passage into the Whisky Library in real life. Opportunities aren’t so readily available but I hear the Badger is letting a select few visit. Luck favours the brave. 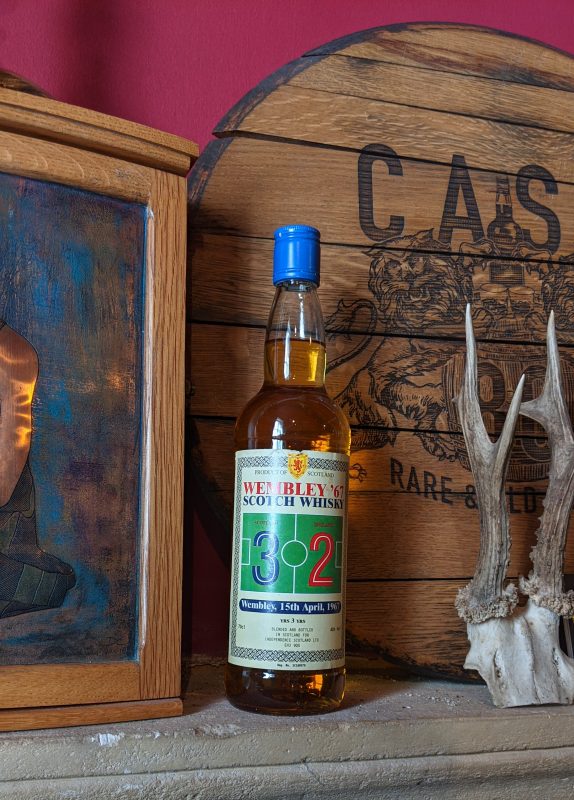 We will start, as is logical, in the past. Wembley ‘67 Scotch Whisky tells the story of a (in)famous football match over 50 years ago. We have spoken a lot in this blog on the subject of whisky history; in this case this is history, remembered through whisky. A moment crystalised in amber liquid.

So what happened in Wembley back in 1967? Well football, obviously. The match was England versus Scotland. Tense at the best of times but here the pressure had really been mounting; England had been undefeated in almost twenty matches. To take them down now would be righteous glory indeed. This kind of opportunity doesn’t come around every day, so the Scotland team were feeling the pressure too.

A man called Nobby Stiles, apparently a totally appropriate name in the 60s, knew Scotland player Denis Law from being team-mates at Manchester United. He was shook when he saw the team come out onto the field, saying:

“I knew the Scots were taking it very seriously when Denis came on to the pitch wearing shinpads. I had never seen him wear them before.”

Suffice to say, with all that pressure mounting it was hotter in London than even an average sweltering day.

Both teams gave it their all, with Jackie Charter on the English side even playing with a broken toe – and managing a goal! 4 goals were scored in the last 12 minutes – a final spurt of energy leading to an ecstatic 3-2 win for the Scottish side.

The moment was so ecclesiastic, so sublime that many fans took to dancing in a circle, arm in arm. This video captured at the time gives you the whole recap, twee dancing and all.

For some of us Scots dancing just isn’t enough and thus this bottling to celebrate the achievement was born. It is a 3 year Old Scotch Whisky blended and bottled in Scotland – but it is more than that. It is a symbol of victory against the odds, of fate dealing you a decent hand and of the value of wearing shinpads. 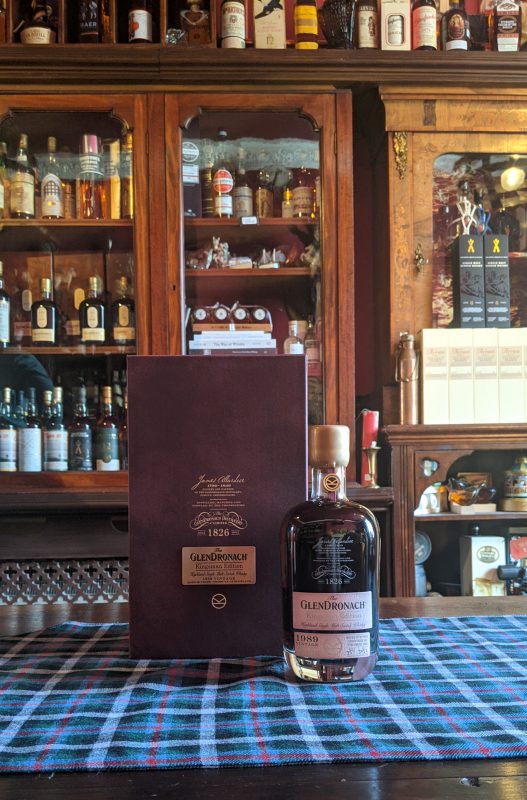 If you go into a whisky shop and chat with the vendor there about Glendronach it is very likely they will talk to you about the longevity of this whisky. Smiling like the cat that got the cream, the shopkeep will tell you about how, over the last 100 years, the distillers put away so many casks that Glendronach stock has become very good, very mature stock. To drink Glendronach is to actively partake in history.

It also serves as a nice lesson in planning for the future and leaving casks to mature.

And so a bottle of well aged Glendronach is a good and splendid thing. This whisky spent the better part of three decades being matured in the beloved, rich Oloroso style. Unlike the classic expressions, which are many good casks blended in a single malt, this bottling has been crafted from only 6 carefully selected casks.

And who chose these casks? Well it was their esteemed master blender Rachel Barrie, with the help of Hollywood film director Matthew Vaughn.

The King’s Man, Our Whisky

This is because this particular bottling was released in conjunction with a new Hollywood film: The King’s Man, starring Ralph Fiennes. You may have seen this films’ forebears, a sort of revision of the James Bond style genre of films. Dapper, with just enough action and a smattering of British humour. The two previous films were very successful.

Unfortunately for Ralph, The release of The King’s Man has been postponed until August 2021. We hope that he at least has been given a bottle of this Glendronach, to tide him over until the film’s big premiere. Though we are not sure how likely that is, as the bottles were limited, hand-labeled and valued at a four figure price point. 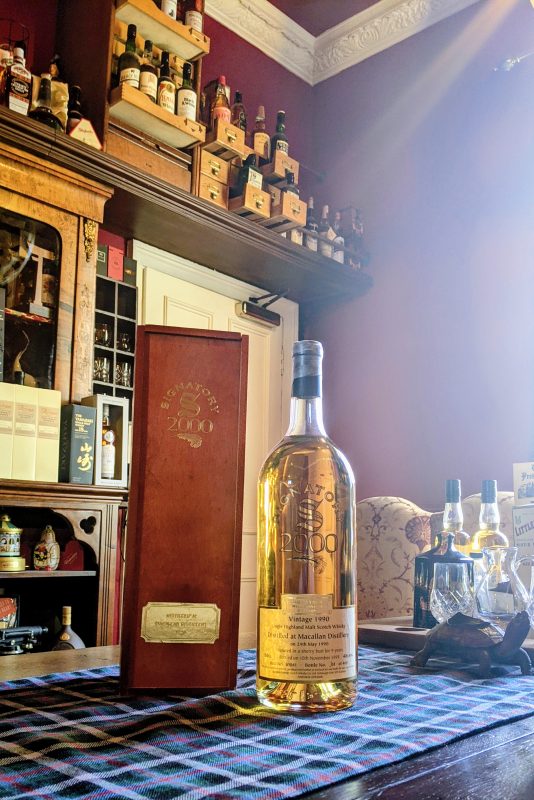 Having taken you back to 1967 and then forward to August 2021 I would now like to guide you back to the cusp of the last century: The Millennium. The 20th century was witness to many fantastic decades in Whisky History but also, in the latter half, many sad ones. Few distilleries survived the vodka soaked 1980s. Yet the markings of success among the few remaining distilleries were beginning to show. One of those nascent success stories was Macallan.

Up until the 1980s Macallan had been used mainly in Blended Scotch Whisky. As distilleries fell to the change in markets Macallan took a bold step and decided to invest in themselves as a premium Single Malt. The word ‘invest’ is key here as the directors of Macallan had to put time, effort and funds into manifesting their dream. This meant going the extra 1,500 miles and choosing the perfect trees, cooperage and drying process down in Jerez, Spain.

Within a similar timeframe Andrew Symington was in Edinburgh, deciding to move on from managing the Prestonfield House Hotel, taking a leap of faith and starting an independent bottling company.

It seems that luck and hard work prevailed, as by the end of the 1990s both companies were successful enough to work with each other. This is how the Macallan 1990 Signatory Vintage was born.

Party in the Y2K

Of course the bottling was also released to celebrate the new Millenium and so they designed it quite large to accurately symbolise this grand event. And, I imagine, so that many people could enjoy Macallan at all the good Y2K parties.

Some clever sod at the time found the strength not to open their Signatory bottling and instead sell it on. The bottle has passed hands and become a relic of success. Eventually it found its way to our Whisky Library where we, and the Badger, are looking after it well.

At least, until the post-coronavirus parties start… 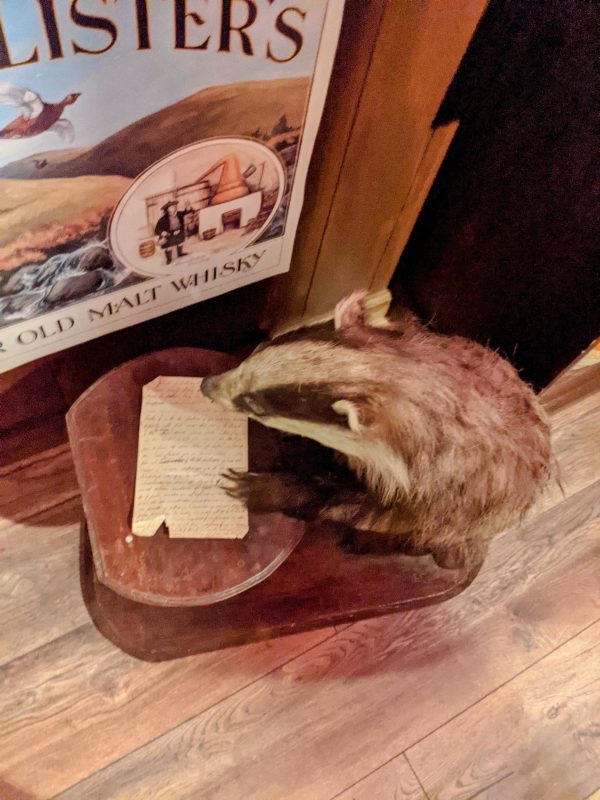 A Return to the Library

Thank you for delving into the Whisky Library with me, holding these three bottles up to the light and letting their stories shine through. Perhaps we will see you at Castle Street sometime soon. If not, don’t worry. We may yet return to the Library to see what we can find.