It became possible to travel by rail from London through to Scotland by the late 1840s, and a train from the south by both West and East Coast routes would come to be known as a ‘Scotch Express,’Perhaps the most famous began running to Edinburgh in 1862, although it was not until 1924 it officially received the title ‘Flying Scotsman’. The early trains at first did not run to fast schedules, and it was only towards the end of the 19th century the term ‘Express’ could properly be applied.

Regardless of how quickly they got there, the new influx of visitors to Scotland helped to bring about a great expansion of the Scottish railways, with six major companies bringing services to all corners of the country until they merged with the British network in 1921.

THE GREAT NORTH OF SCOTLAND RAILWAY

The Great North of Scotland Railway was founded in 1845, at the height of booming excitement for new railway projects all over Scotland. Sometimes, though, excitement alone is not a substitute for sound planning, and the young GNSR ran into funding problems, management issues and lower than expected demand. In fact, the fledgling company never completed its intended goal of providing a direct link from Aberdeen to Inverness.

With a little ingenuity and luck, an inauspicious start can still be turned around. The GNSR noted that the population of Scotland’s Speyside region was scattered among small villages, eager to be connected to one another. Slowly, in parts, the network grew its branches, creating arteries that ferried goods and traffic around the region, pumping new life into the small communities.

Whisky was one such item of trade – long produced in Speyside – and the distilleries flourished as they used the short ‘Whisky Railways’ to obtain materials and send their finished spirits to distant markets. Tank engines, known affectionately as ‘puggies’ often belonged to the distilleries, and shunted plenty of sloshing casks to where they were needed.

While puggies handled the local freight, the GNSR hauled heavier goods and passenger services on compact but powerful 4-4-0 locomotives. William Cowan became chief engineer of the GNSR in 1857 and was one of the pioneers responsible for introducing the 4-4-0 type to the UK. Their ability to navigate tight turns while keeping the muscle needed for goods hauling was a perfect fit for the GNSR network, and Cowan’s designs were iterated upon for the remainder of the company’s lifetime.

Robin Barnes painted a Cowan ‘M’ Class cutting through a snowy Speyside scene, and it is with great love and reverence that we place this watercolour locomotive on our Speyside bottling in the Scotch Whisky Express series.

Taking away not just one, but four, prestigious industry awards at the 2018 International Wine & Spirit Competition, 2018 Independent Bottlers Challenge and 2019 Spirits Business’ Luxury Masters for the first two releases in their Scottish Folklore inspired whisky series, Edinburgh based Scottish whisky broker and independent bottler Cask 88 have quickly gained recognition for groundbreaking expressions that are in a league of their own.

Where our Scottish Folklore Series took inspiration from the myths and legends that shaped Scotland’s culture, our Scotch Express series looks at the historic modernisations that brought Scotland’s culture to the world.

“Cask 88 has become known around the world for delivering award winning single malt expressions, including three gold medals in 2018, and another in 2019”.

A 1940s childhood passed within sight and sound of a busy main-line railway on which every train was hauled by a steam locomotive, many of them bearing names to grip the youthful imagination – Golden Eagle, Royal Lancer, Sayajirao, Irish Elegance, Jingling Geordie and Wizard of the Moor – led inevitably to a fascination with trains and railways, which over time broadened into a wider interest in other forms of transport too, on the sea and in the air.

Without Robin’s artwork, this series would not exist. He has captured iconic locomotives in highly detailed watercolour on the bottles, and scenes of the railways in their wider Scottish context for our magazine advertising.

The GNSR bottle is a winter release, and snowy Speyside lends itself beautifully to atmospheric watercolour. On the bottle, William Cowan’s class ‘M’ steams through the cold winter air and snowy fields, almost a sign of modern industrial defiance of a time of year that might traditionally have shut down people’s ability to travel.

In our print advertising, we pull back to reveal the old railway freight yard at Aberlour, a bustle of activity despite the quieting blanket of snow over everything. A GNSR Manson ‘O’ class hurries through the scene, past stationary wagons with whisky casks being loaded aboard. Benrinnes and other Speyside distilleries are, after all, a short distance away from this hub. 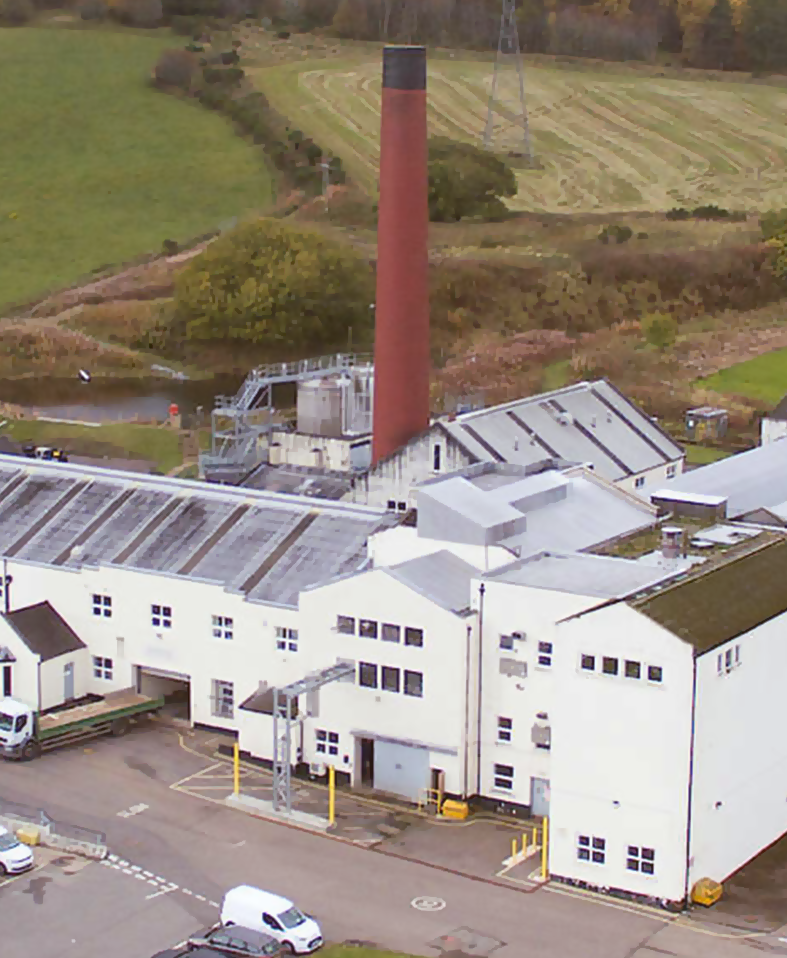 One is spoiled for choice up in Speyside, a region of fertile valleys, fast flowing rivers, noble mountains, farming communities and, above all; whisky distilleries.

The GNSR became Victorian Speyside’s premier transport network, helping to fuel a boom in the whisky industry that still hasn’t died down to this day. It seems that every glen in Speyside has its own distillery – over 50 distilleries are scattered around the terrain; almost half of Scotland’s total.

To navigate the terrain and serve Speyside properly, the GNSR had to develop many small branch lines to weave through the glens. One such railway still exists as a heritage feature, running steam services even today – the Strathspey Railway, which runs past many notable Speyside distilleries.

Benrinnes distillery sits on the slopes of Ben Rinnes itself, overlooking the Spey valley below. The grade would have been a bit steep for the railway to match, so the Strathspey branch hugs the river closely. Benrinnes distillery, meanwhile, would only have needed to roll its casks of whisky a couple of miles to the goods yard at Aberlour to get its whisky loaded onto GNSR wagons, and then off to the wider world.

Benrinnes is a hard-working distillery which uses traditional worm tubs to produce a spirit that punches above its weight. It takes well to both ex-bourbon and ex-sherry casks. It thus feels like a perfect counterpart to the Cowan ‘M’ class 4-4-0 on the bottle – a locomotive designed with considerable heft and maneuverability, but not without elegance.

Raise your glass, then, to the partnerships of whisky and rail that were forged in Speyside almost over 150 years ago – for we still reap the benefits today!

The Scotch Express Series: The Great North Of Scotland Railway is now shipping. The third release from the popular series will be another highly limited release. Reserve your bottle today while supplies last.