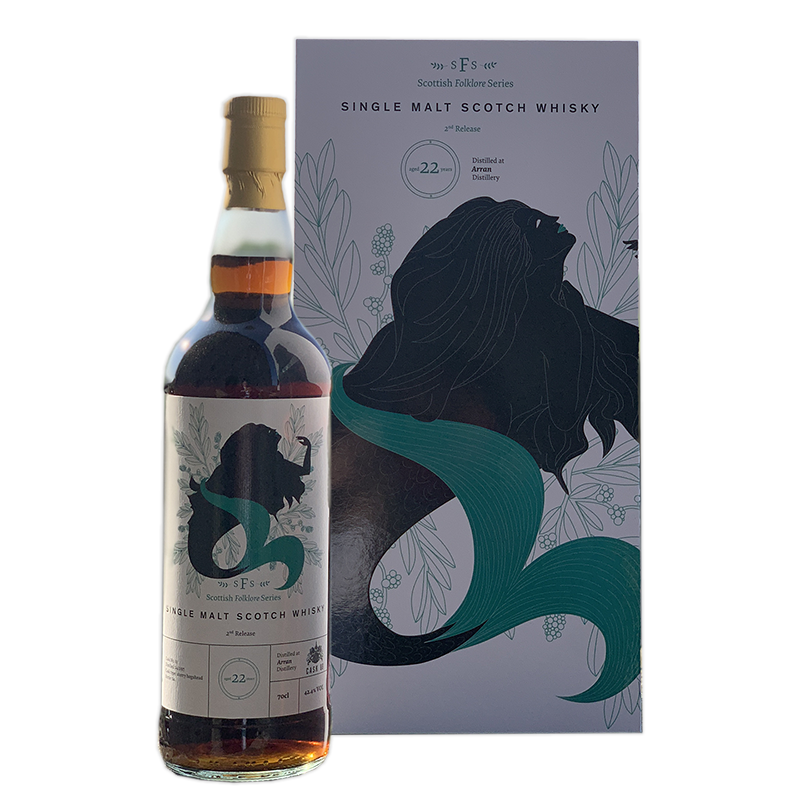 Scottish history, culture and folklore are so closely intertwined, it is almost impossible to discern one from the other. Generation after generation have passed on the stories, shared their tales and recounted history and folklore in the same breath. Most common of these are tales of mythical beasts who roam the highlands, stalk the lowlands and inhabit the islands.

It is from these magnificent tales that we took our inspiration for this truly unforgettable series and we hope you enjoy the expressions as much as we enjoyed creating them for you.

More complex in character than the better known mermaids and sirens, Selkies are creatures of duality. They are both predator and prey. Oftentimes gentle and beautiful, and at times, dark and malevolent – like the ocean herself.

Selkies shed their skin to change from seal to human form. They dance alone on the moonlit shore, or lie in the sun on rocky islands just off the coast. Terrible and handsome, selkie folk come ashore to seek out men and women restless in love, to drag them to the ocean’s depths where they can be lovers.

Yet, while ashore, selkies are at risk of being trapped by having their seal skins stolen. Without their skin, the selkie is no longer able to return home and is forced to remain a part of human society.

The selkie is under the hold of the human who has possession of their skin, and can be forced into marriage. While in human form, selkies may have children and be a good and loyal partner. Yet – if reunited with their skin, the selkie will return immediately to the sea, without even a backward glance.

Taking away not just one, but three, prestigious industry awards at the 2018 International Wine & Spirit Competition and 2018 Independent Bottlers Challenge for the first release in their Scottish Folklore inspired whisky series, Edinburgh based Scottish whisky broker and independent bottler Cask 88 have quickly risen to become recognized for groundbreaking expressions that are in a league of their own. The next chapter pushes the boundaries even further by combining a remarkable whisky, alluring storyline and elegant bottle design.

The second release in the Scottish Folklore series carries forward the alluring style that captured the attention of whisky enthusiasts around the globe. An intricately designed label features the Selkie in an attractive colour scheme that immediately draws you in with each of the careful details. Included with the bottle is a beautiful presentation box to complement the expression with a visually striking appearance. This is a release of the highest quality that will standout among any collection.

Bringing The Legend To Life

Just off the west coast of Scotland lies the beautiful Isle of Arran, the perfect place for a Selkie to take a lover. Here we found the exquisite liquid that was to become the 2nd release in our Scottish Folklore Series. The whisky to represent our capricious Selkie comes from the island’s most famous and longest lasting distillery. There used to be fifty on the island, but most were ‘moonlight’ distilleries producing illegally. The Arran distillery, and its small population, have endured the changeable ocean moods and the myths of this region, to produce a whisky as beautiful and intriguing as the Selkie herself. 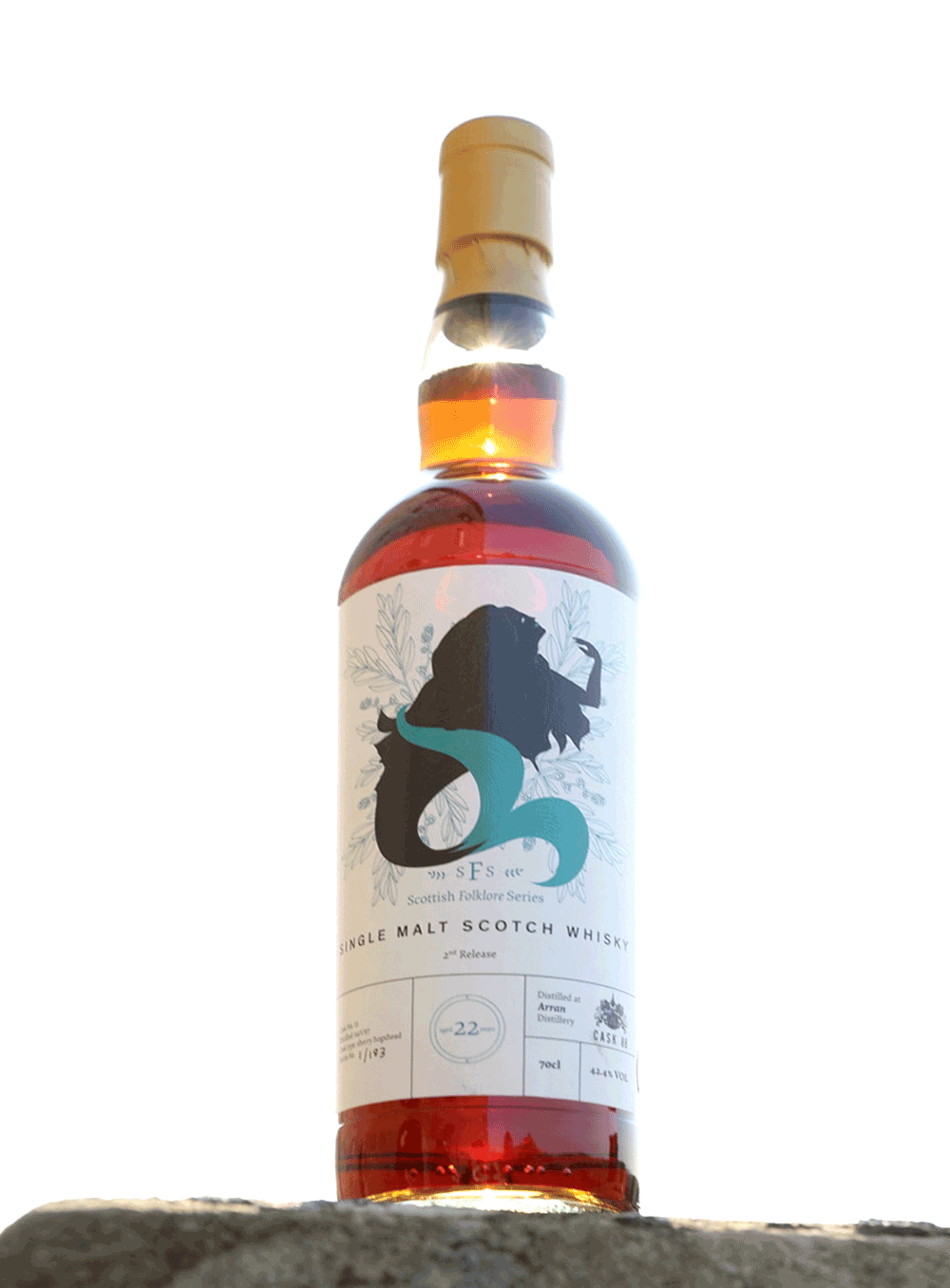 The Arran Distillery is situated in the beautiful Lochranza area of the Isle of Arran, just off Scotland’s west coast. Initially founded in 1994, the distillery at first experienced some unexpected issues when two golden eagles nested on a cliff side close by, halting construction until 1995. When the distillery did eventually get up and running, it quickly started to produce top quality single malt and they are now known for being experts and masters of whisky production.

The island itself is a popular destination for holiday makers, climbers and, on some occasions, Selkies. Visitors like to experience the island’s rolling hills and mountains, serene lochs and gorgeous beaches, and of course, the world famous Arran whisky. It was here, some 22 years ago, that the incredible spirit for our Selkie bottling was first distilled and put into cask. It has since taken on the character of this region, all its magic and changeable climate, to develop into something truly special.

The outstanding cask selected for the Selkie was distilled in 1997 at The Arran Distillery, then matured for more than 22 years before being bottled in 2019. It is released as a single cask expression with just 183 bottles produced.

Nose
The nose is very luxurious with delectable notes of sweet Demerara sugar, Coca Cola and classic sherry cask dried fruit. These give way to some warming autumnal aromas ranging from sweet roasted chestnuts to dried tobacco leaves and hints of tree bark with some malted cereal notes still preserved.

Taste
Viscous and palate coating to start, with rich dark fruits and rum molasses coming to the fore. This meanders through cardamom and cinnamon spice before reaching creamy salted caramel. The sweetness fades towards the finish, leaving gentle centre palate woodiness and some black pepper.

Finish
The finish brings back a hint of Coca Cola and combines it with soft oak and more dried tobacco leaves. This gradually makes way for lasting hints of ground peppercorn, sugared almonds and the unmistakable aroma of Scottish sea breeze. It’s a relaxing and intriguing finish that takes you right up to your next sip.

The Scottish Folklore Series: Arran 22 Year Old is available now for immediate shipping. Just 183 bottles were produced making this a highly collectible limited edition. Bearing in mind the success of the first release, we expect these to sell out quickly. Order your bottle today to avoid missing out.