Score the pair of final releases from the Scotch Express series and save 10%. Don’t miss your opportunity to showcase the industrial spirit of rail on your top shelf with two spectacular expressions.

The Glasgow & South-Western Railway served a much more compact area than its peers, the Highland, Caledonian and North British Railways. One can trace its origins to the Kilmarnock and Troon colliery line – a pioneering 10 mile stretch that carried Scotland’s first passenger services, and in 1817 (temporarily) ran the first steam locomotive in Scotland. A consolidation of various smaller railways in the southwest in 1850 produced the G&SWR, which was to become one of the five great Scottish Victorian railway companies, and a great boon to the industrialising city of Glasgow and its attendant ports.

The G&SWR’s central hub was at St. Enoch Station in Glasgow, a mighty edifice including the imposing St Enoch Station Hotel – the first building in Glasgow to be fitted with electric light. As well as connecting to Scotland’s busy southwestern routes, regular services to England were run down the west coast via Carlisle. The route was acknowledged to be slower than competing east coast services, so compensated for this by letting passengers travel in far greater style and comfort.

Always slightly compact in scale, the G&SWR favoured running smaller tender locomotives on their services. Towards the end of the railway’s life, the engineer Robert Whitelegg joined the company and brought with him a knowledge of large tank engines. The G&SWR 540 ‘Baltic’ 4-6-4T were a Whitelegg design, and incredibly well engineered, built to the highest specifications. Despite high maintenance costs, they performed exceptionally well and were kept in service for many years after the G&SWR was absorbed into the British railway network in 1923. We chose the Whitelegg Baltic for the bottle label, to show the G&SWR at its most confident.

We have already mentioned the Caledonian Railway in passing. Our second release in the Scotch Express series was of their main rival, the North British Railway – and we described the enmity that burned between these two Victorian companies. Now, with the fifth and final bottle we can balance the scales and tell the story of the diva-esque Caledonian.

Glasgow based, the Caledonian Railway was founded off the back of a successful west-coast passenger connection to Carlisle. Over the course of its life, the Caledonian made aggressive territorial grabs to extend its reach into the territories of the North British and Glasgow & Southwestern Railways. Much revenue was generated from coal haulage, but the CR wanted to be Scotland’s pre-eminent mode of travel for well-to-do passengers, and spent lavishly in order to attract commuters and tourists to its services.

The approach paid off, and the CR came to be seen as the grandest of Scotland’s railways, especially when played against the staid and plodding reputation of the NBR. In all things the CR was a beautiful and attention grabbing railway, with stylish station architecture, grand railway hotels, shining blue locomotives, lusciously printed marketing and a cheeky grab for Scotland’s Royal coat of Arms to use as their own personal symbol.

The most iconic of the Caledonian’s express engines was the 4-6-0 class 903 ‘Cardean’, which is heading south to Carlisle on our label, along one of the two routes that linked Scottish to English railways – and served as the main battleground between the Caledonian and the North British railways.

A 1940s childhood passed within sight and sound of a busy main-line railway on which every train was hauled by a steam locomotive, many of them bearing names to grip the youthful imagination – Golden Eagle, Royal Lancer, Sayajirao, Irish Elegance, Jingling Geordie and Wizard of the Moor – led inevitably to a fascination with trains and railways, which over time broadened into a wider interest in other forms of transport too, on the sea and in the air. Without Robin’s artwork, this series would not exist. He has captured iconic locomotives in highly detailed watercolour on the bottles, and scenes of the railways in their wider Scottish context for our magazine advertising.

Of the several whisky distilleries located in Glasgow, Auchentoshan is the best known and longest established, sitting on the north bank of the river Clyde since 1817. Unusually for Scotch Whisky (but more common for Irish), Auchentoshan triple distills every drop of spirit, creating a whisky that is light in body and very sensitive to oak maturation. It is a midsize Scottish distillery, with a capacity that is considerably lower than some of the big dogs, but since no Auchentoshan malt is used in blending, this sought after malt whisky has a weighty impact on the industry perhaps disproportionate to its size. One might be tempted to make a comparison to the small but mighty G&SWR here…

The closest point of the old G&SWR network to Auchentoshan is the Renfrew Wharf on the south bank of the Clyde – over the river from the distillery. This is part of the route that connected Glasgow with Ardrossan harbour – a very lucrative branch that the G&SWR maintained full control of for over 40 years, until the battle for Ardrossan’s trade began to escalate between the G&SWR and Caledonian railways.
Ardrossan was a hard working international port, and Auchentoshan whisky may well have found an easy path to the rest of the world by running on the old G&SWR lines.

Raise your glass, then, to the abiding need for whisky to travel, and for the railways and ships that enabled it to do so! 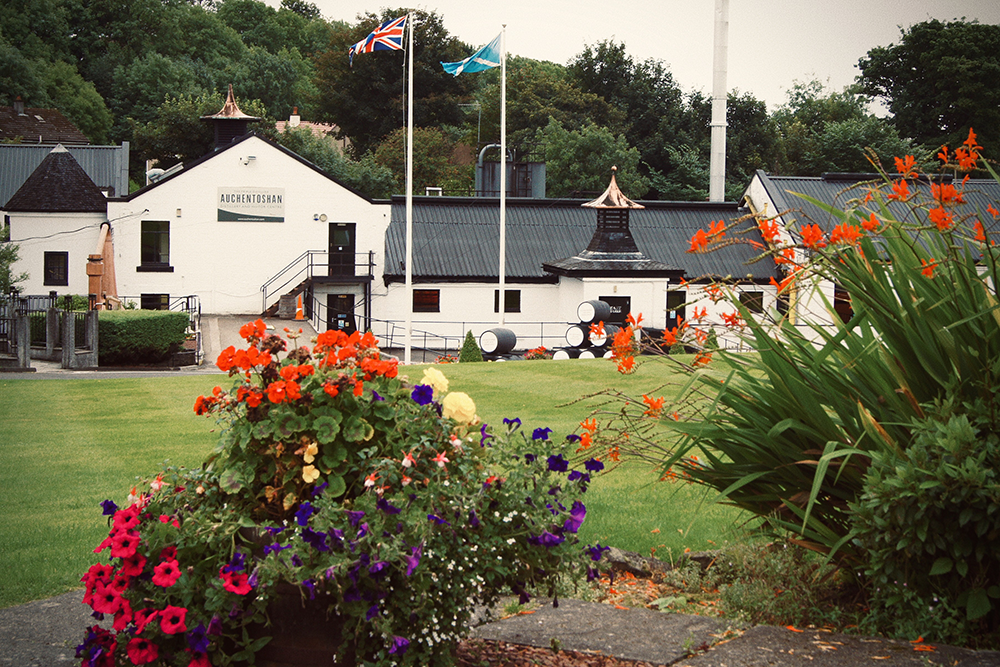 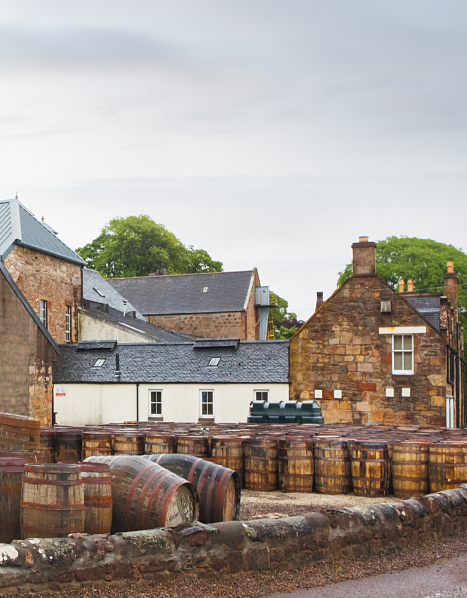 Built on the banks of the rapid River Teith near the Highland town of Doune in 1785, the Adelphi weaving mill was one of the glowing embers that started the full fire of the Industrial revolution. Using the largest millwheels in Europe for power, the mill brought humming life to the local community, constantly innovating to stay at the top of its game.
The mill only ceased to function as a textile mill in 1965, and was almost immediately transformed into a whisky distillery – which is now the beloved Deanston distillery, known for long fermentations and slow distillations, giving a very full-flavoured whisky, with a substantial waxy body and long finish.

The town of Doune was served by the Caledonian railway from 1880 until 1965, with the station being a beautiful example of Caledonian railway style… until its demolition in 1968. Sadly, this means that though the Adelphi mill and the Caledonian railway were contemporaries of one another, both drivers and products of the bold new industrial age; the Deanston distillery was founded too late. The last mournful whistle of the final Caledonian service on the Dunblane, Doune and Callander Railway died away before the comforting rumble of scotch whisky stills had started up.

Raise a glass of Deanston whisky, then, to the spirit of entrepreneurship and flashy Victorian marketing of the Caledonian Railway – now sadly silent. Well… not entirely silent. A four mile section of the Caledonian Railway between Brechin and the Bridge of Dun has been revived by volunteers, and we took a classic Scottish puggie for a spin to celebrate the release of the last bottle in this wonderful series.

Watch Our Whisky Tasting on the Caledonian Railway Here! 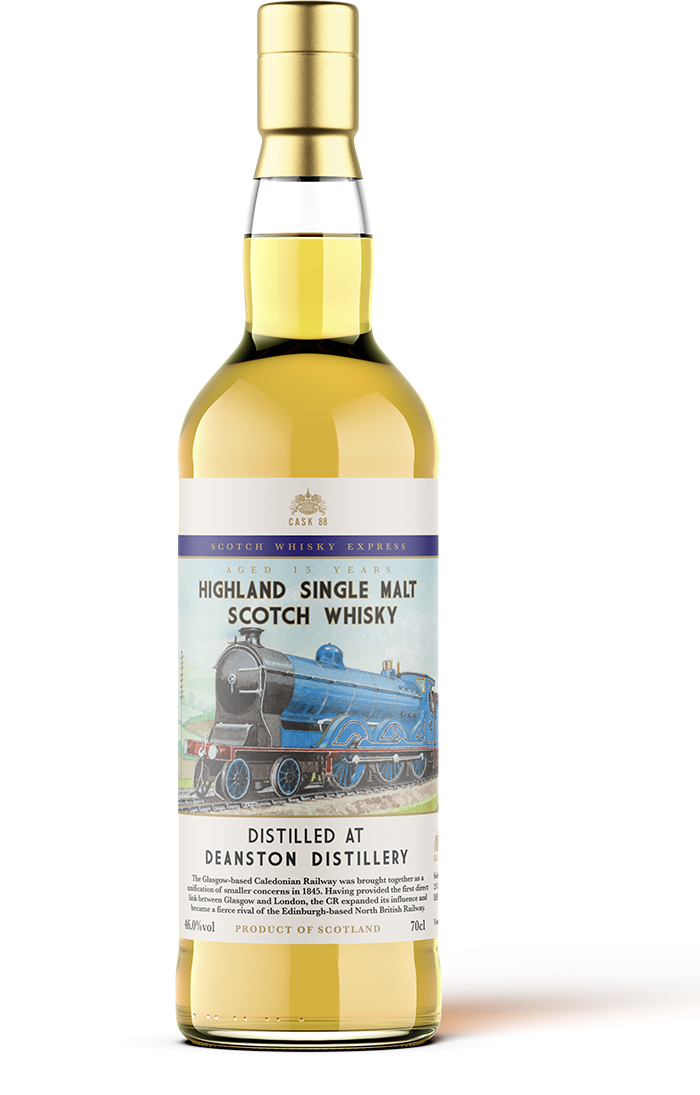 A lively start on the nose, with strong and classic notes of vanilla and meadow flowers. There are signs like distilled fruits, like cognac or plum schnapps. A breath of the steam off a pan of caramel follows.

Sweet beginnings like heavy custard tarts, dusted with a little oaky nutmeg. Then a little sharpening reveals lime zest, and the long finish is reminiscent of crêpes suzette flambéed with a hefty whack of excellent brandy.
A drop of water adds smoothness, and you get brandy snaps and apricots. 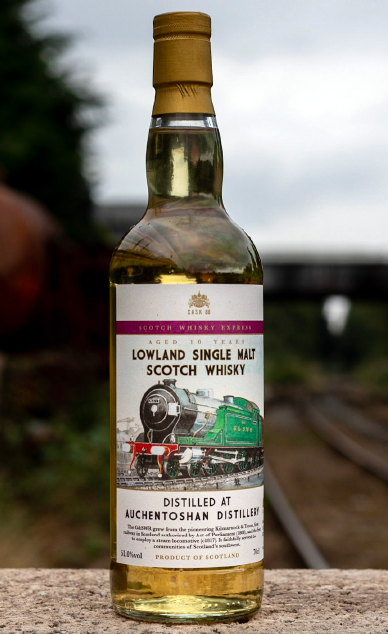 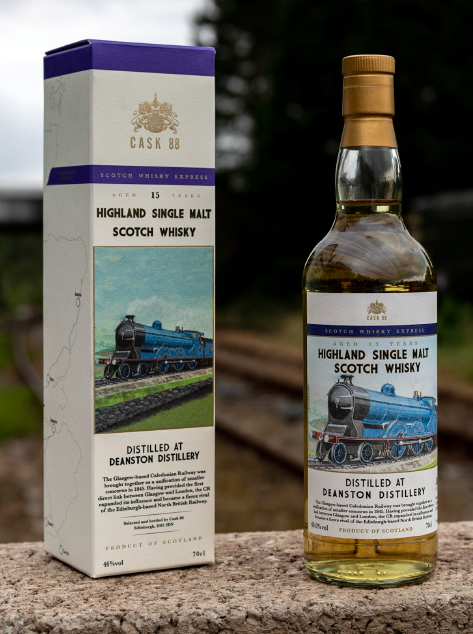 Very fragrant on the nose, leading with gorse flowers and pineapple syrup. There’s a lovely base note of ginger biscuits and a soft touch of white pepper.

The whisky is much drier than the nose suggests, with oaky and tannic notes at the fore. Bitter orange marmalade takes over and does the heavy lifting, supported by a scaffold of beeswax. The finish lingers with the sweetness of dried pear, and a prickle of black pepper.

There are no reviews yet.

Have a Question? Submit it here!